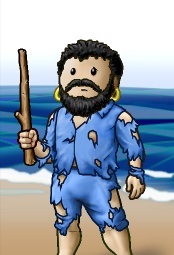 Not to be confused with other pirates of the same name, the Scapegoat in question resides on three of the doubloon oceans -- first Sage, then Hunter, and finally Opal. No responsibility is taken for any acts committed by other Scapegoats on other oceans.

Originally created as a pun on his initial pirate character (who got titled scapegoat within the crew), Scapegoat rose and overtook his "creator" and in fact has become more well-known in terms of the size of hearty lists. Nevertheless, the mastermind behind the two pirates claim that he dedicates equal amounts of time towards both pirates.

On Sage Ocean, Scapegoat's first real crew was Blackbirds of Atlantis. From a lowly Cabin Person, he spent months dedicating his time and effort to the crew, and eventually moved up in rank to Senior Officer in the absence of several key figures, most prominently Ladybird, Darkwan and Dartonias. However, when the crew was merged into The Three Musketeers which was part of the flag Quixotic Tangent, Scapegoat made a quiet exit from the crew and joined that of an old-time hearty, Daggerdarla.

Currently, Scapegoat calls Hunter Ocean home, specifically Quetzal Island*. Having spent a short stint at El Cielo Azul, he eventually moved on to Nautical Stars under the persuasion of Pipis. He became one of the Senior Officers in the crew, and was one of the more regular pillage leaders. He also bought a tan/maroon parrot familiar, but its whereabouts as of late have been under question. In August 2007, he left the crew Nautical Stars and later that day, joined Yeyi Xoxocti Coatl.

Unfortunately, Scapegoat on Opal Ocean is much less illustrious, not being able to converse in German well enough meant his progress there has been limited.
*Scapegoat actually ports at Gallows Island, but spends all his time on Quetzal.