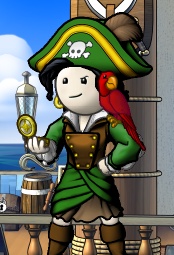 Rosered is a senior officer of the crew Dragon Slayers.

Rosered came into the Azure ocean at the end of Alpha testing and has been regarded as one of the community's premier artists. She has won and placed in many forum art contests including the Prized Parrot Paintings contest, in which she got her beloved parrot, Edgar (who is rumoured to eat souls).

She became a wandered on the Midnight Ocean as a member of a defunct crew. Surprisingly she met up with the Dragon Slayers where Ecanus, the senior officer, excitedly asked captain Jbeard if they could keep her. Ecanus was pleasantly surprised when Rosered asked to join the crew of her own volition. Currently, she can be spotted at the Brawl table swordfighting to her heart's content and striking fear into her opponents. It's rumored that she placed her bedroll next to the Brawl table in the Dragon Slayers Crew Villa. She's won many Swordfighting Tournaments claiming she entered for the fun of it and not for the prizes. Not only does she pillage with her crew, she can also be seen tarting around the docks of Alpha Island with friend and contemporary, Llama, chatting about art.