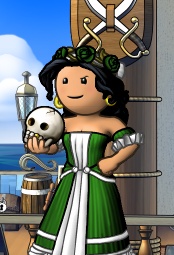 Rifkind washed up on the shores of the Azure Ocean during the alpha period. She founded the crew ARR and joined the flag Old Spice and helped them with the colonization of Guava Island. Much of the success they enjoyed on the island was accredited to Rifkind and Homullus' planning to gather colonization supplies beforehand, so that their island was running full-steam while the others were still building. She served as governor of the island until a week or two before the ocean closed, giving it to Homullus at that point. During her tenure as governor, Rifkind worked to establish a navy that could be used as a ferry system to any archipelago, in an effort to get more pirates to call Guava home. Additionally, Rifkind was the first pirate to achieve the experience rank of Sublime in a duty puzzle.

When Midnight opened, most of Old Spice formed Midnight Armada, but Rifkind founded Nyx's Scions along with Complicated and Black Death. She owned several shoppes on Turtle Island; her new flag using the island as their home. After their failed attempt to capture the Ringer-controlled Turtle, Nyx's Scions broke up, with Black Death leaving to form The Union with Potato and ARR joining Sinking Feelings to form Widows and Orphans. The new flag was based on Rifkind's love of tight-knit crews and flags that actually enjoyed each other's company. She helped the flag thrive for a short while before retiring from the game. Those that knew her as a flagmate remember her fondly. Her love of word games, such as Acrophobia, fueled flag officer chat on many nights.

The original Rifkind has NOT emerged from retirement and the one on Sage is not the same person; if you want to find her, the place to look is Midnight. Only time can tell what lies ahead for this once renowned pirate.