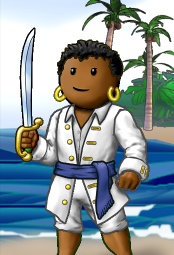 Complicated has been playing since the very early days of Beta testing.

On Azure, Complicated won his first familiar, a green octopus named Blinky. As part of the first season winning OCL sea battle and swordfighting teams he won a white monkey and a white parrot, which were subsequently given to other BD crew members. During March's Sword Fighting Tournament, Complicated won another familiar - a yellow monkey named Tenacious.

Complicated's love is swordfighting, and since washing up on the shores in Azure, he has been addicted to the crossing of blades. At this date he has held the distinction of being the top-rated swordfighter on the Azure, Midnight, Chinese, Indigo, Cobalt and Viridian oceans. In between swordfighting he has tried his hand at crew and flag building, and championed the cause of the bathrobe. He was very successful at this, building Black Death to be known and feared throughout the Midnight Ocean; he also engaged in some political experimentation with the formation of both The Union and Nyx's Scions. Overall, however, nothing has been able to detract from his love of the sword.

Having long since retired from ocean politics he now spends his days nettling crew members, and wandering around in rags on Turtle Island on the Midnight ocean. Those interested in improving their swordfighting are encouraged to look him up, as hes always keen for a game. Be warned, he has been known to occasionally froth at the mouth and bite when especially excited.