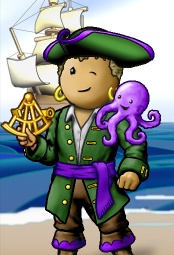 Potato (also known as PotatoJones) is a pirate of the Midnight Ocean, and currently captain of the crew Lora Bora.

He is the former captain of the Rudder Lubbers, former king of the flag Rudder Revolution and former king of the flag The Union. Known to favor diplomacy, Potato became known to many pirates through his post Permanence in which he urged his fellow players to keep the game in perspective. It was kept at the top of Piratical Parley and Politics as the only Announcement for nearly a year and a half. He is not a heavy role-player, but always speaks with what appears to be an Irish or Scottish accent.

There have been arguments to the contrary, but Potato will attest that he is the original pirate to dress in the unique green and purple color scheme, which he is rarely seen outside of, including his once-unique set of green rags.

In November of 2004 he won a purple octopus in the Pirate Parodies; his name is Klein, in a roundabout reference to Möbius, his purple octopus from Azure during Beta testing.