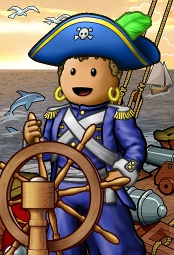 Redsam is a cabin person of the crew Bilingual Blood and a member of the flag Kraken Skulls on the Cobalt Ocean.

On August 20th, 2005 a pirate washed onto the shores of Sakejima Island. Little did he know that he had entered a new world that would consume his life, a world he never wanted to leave. After several months of play time he decided to introduce his two best mates, Junkmaster and Drunkard, into this new world. Ever since, the trio have made made major accomplishments and fatal flaws. Redsam claimed he could never be happier.

Redsam was captain and navigator of the crew Last Chance with one of his best mates Junkmaster. Drunkard has made a jump to the crew Serial Pillagers

Redsam hadn't started playing on Midnight for quite a few months. Once he did though, he quickly became friends with Biiann, who made him a senior officer of the crew Blood in the Water. Later he became lord of the flag.

For a long time he had wanted to be a greeter but he could just never get there. Then the new release came out and he was overjoyed. So currently while he is online and not pillaging, he considers himself as a part-time greeter.

"Lovin Life With Big Red," a funky name for Red's funky radio station, or online stream. Anyways it is his online radio station. He is usually on during the weekends by request and plays almost any request ye give him. He hopes to see ye there.