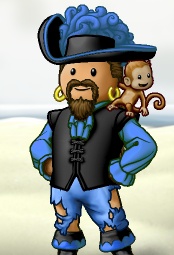 Drunkard is a senior officer of the crew Riders on the Storm, under the captainship of Starsha. He is a lord of the flag Dark Storm Rising and sails the Cobalt Ocean.

In mid October 2005 a new pirate washed up onto the shores of Kirin Island. He had joined Redsam and Junkmaster early on in the crew Shank Sharks. Starting off as a pirate, Drunkard gradually learned the puzzles and basic everyday things. Then after some time, with officer training from Mginty and Redsam, he rose to a comfortable fleet officer rank. He helped considerably after the former captain Teneal left.

After some time of being a senior officer, Drunk left to co-create a new crew. Then around September 2006, he joined and is still currently a member of Serial Pillagers in which he was made senior officer by none other than Willelmus in a week.

Drunkard has held every title known in game (except governor).

Drunkard slowly started to play around on Midnight just for some fun. He currently is in the crew Criminal Instinct under the flag Death Drakkar. He plays under Drunkkard because his original name was already in use.

Ever since hearing of the greeter program, Drunk always wanted to be one. Thanks to the new update, he has been able to become one and is helping new players. With the new updates brings some inexperienced players and, although Drunk is familiar with the system, he runs into difficulties every so often.

Sadly due to a misconception, Drunk was suppended and can no longer be a greeter.

Since starting the game, Drunk has obtained a good skill in Gunnery. He is ordered to gun regularly during pillages. More recently, he has become extraodinarly good in Carpentry, gaining the Incredible Carpenter award and gaining a Grand-Master in puzzle standing. His current record for carpentry is, in a battle that took seven minutes, gaining a total of masterpiece 10.

His trinkets have been collected through a combination of luck, and the right amount of PoE.