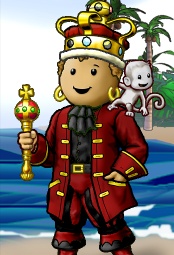 Ratoscurvy sails the Viridian Ocean with his mates from Midnight Aurora, flying the flag of Imperial Coalition.

Ratoscurvy joined puzzle pirates on Cobalt in May of 2005 under the name Scurvyrat. After his trial expired, he decided to move over to Viridian to test the waters. Not knowing at the time he could keep the same name, he changed his name to Ratoscurvy.

Ratoscurvy joined up with the crew Cheeky Monkeys and was trained by Stinkie, Violent and Talaith. This crew was made up mostly of people from England and he had hopes of starting his own crew, so he moved to Dark Legion after about two months. Jellysnail was captain of Dark Legion at the time, and it was one of the largest Viridian crews. Ratoscurvy worked his way up to senior officer, bought a few ships, and got to know the best SOs in the crew. After a month he met with them and they decided to form their own crew.

Ratoscurvy then formed Midnight Aurora with his trusted SOs as an oligarchy. It remains an oligarchy except during blockades. They joined the flag Twisted Psychos when the crew earned enough fame to do so. Twisted Psychos became a stagnant flag, and Ratoscurvy had wishes to be active in blockading. He was approached by Oneeyejoe and Kornflake to join The Screaming Skulls. He accepted the invitation and became a prince of that flag.

The Screaming Skulls was later reformed with slightly different members and crews under the name Imperial Coalition. Ratoscurvy was originally a prince but became monarch shortly after the Tigerleaf Mountain II blockade. He has since resumed his role as royalty, and manages several shoppes on the island.

Ratoscurvy has a reputation as being a notorious flirt.