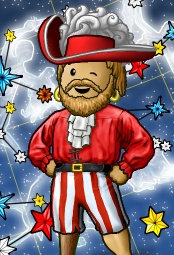 Quibilia is a pirate on the Meridian, Emerald and Obsidian oceans. He currently sails on the Meridian Ocean as an independent captain at the helm of Pax Meridiana. He maintains close friendship with his former crew, Pouncing Piranhas of the flag United We Stand. He also sails on the Obsidian Ocean as a fleet officer in the crew Midnight Aurora of the flag Lion's Bane, and on the Emerald Ocean as a fleet officer under Monlizzy of Imperial Coalition.

Quibilia began as a pirate in the crew King of Spades, under the flag Coherent Insanity. Having some previous experience with the game, he quickly gained experience in piracy skills, but not enough to rise through the ranks in King of Spades. He was, however, content with the crew. After about two weeks in King of Spades, he started thinking about moving to another crew, and after some searching, received an offer from Roamin of Life is a Beach, of the flag United We Stand, with whom he had played a poker game: with his stats at the time, he would receive a fleet officer position. After some pondering, several questions, and a conflict with the captain of King of Spades over the matter, he accepted. For some time, he was content. After a while, however, Roamin went dormant, and the crew began to shrink. He subsequently moved to the head crew of United We Stand, Pouncing Piranhas, as an officer, later being promoted to fleet officer.