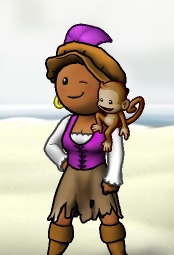 Obaba is a pirate on the Midnight Ocean.

Obaba first hit the shores of Azure on her birthday, August 15, 2003. At the time she was a different pirate by the name of Sabiha. She quickly crewed with Sexy Swindlers, crew of her offline friend, Reichan. Life offline had taken Sabiah across the country, settling squarely in the landlocked Midwest. At about the close of Azure, Obaba was created as an alt, but with the new ocean on the horizon, Obaba would be the one to start on Midnight.

At the dawn of Midnight, Dipwood, the former captain, recomended those still loyal to the crew, to join Pirates of the Damned. Before settling, she was invited by Crow into another allied flag, The Jolly Company. While there was a little crew hopping after The Jolly Company winning Emperor Island, she stayed within the flag.

Doing art once again, she made another move after creating her first alt on Midnight. Toji promptly joined the new crew, Le Freccette under the leadership of Dartwith. Over time, Toji became the predominant pirate on Midnight and Obaba took a lesser role within the crew as the muse.

Today she stills logs in with Obaba to relax with friends and family who still play, as well as enjoy the gameplay and players that inspired her creativity again.