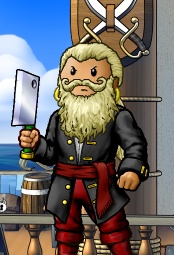 Phade is well known for both his skill in all piracy puzzles (particularly Sailing, and all forms of Battle Navigation), and his numerous quarrels with the Ocean Masters on the forums.

These fights usually stemmed from incidents in which Phade verbally eviscerated a newer, young player, or added excessive sarcasm to an otherwise valid point during a discussion.

After two years of off and on conflict, which were mainly tolerated due to popular support and a counterbalance of genuine aid to the community, Phade was finally banned from the forums. His banning became a running gag, and he now lives on as a forum fad.

Phade can now be found spending his time on Sage as a co-captain of the Happy Sunshine Brigade, and has also owned the Lettuce Inn on the Isle of Kent, which he was given by Shodan for his blockade navigation while capturing and defending Kent. He has since given the Inn to River as a Valentine's Day gift.

Phade also contributed to the sinking of the Aye Spy, the Ringer observation cutter, on Cobalt at the battle of Harmattan I, along with Sneako, Cloak, and Dragonlily.

Phade was banned for a time starting around March 13, 2006. It isn't known when the ban was lifted, but Phade was allowed to return.