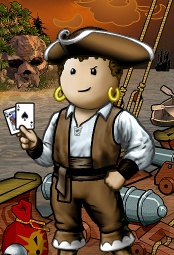 Patricoo joined the Midnight Ocean in July 14, 2004 and remained unsubscribed for about three months. Afterwhich, he subscribed and joined a crew based on Epsilon Island for a short period of time. Patricoo left and wandered around various islands until landing on a pillage group led by Otherwhen. He stayed and agreed to stay as a full pirate.

Patricoo purchased a sloop named the 'Thin Eel', where it mostly ported in his new home, Beta Island. During that time he completed basic officer training, (which was required for his crew) but never finished the entire course. Most of his time is spent gambling, where he has often been noted and remembered at various parlor tables. He opened a small weaving stall, but a large period of inactivty forced its closure.

Patricoo was is a fleet officer of the crew Otherwhen with the captain, Lordkalvan, who is monarch of the flag Water Sleeps. In November of 2006 the ship Patricoo was working on in a blockade was sunk. In the accident he lost his leg. He was unaware of this injury until Early March of 2007, where his loose pants dusted revealing a pegleg. On March 12, 2007 he finally completed LordKalvan's officer training by winning three pillages with a hired crew. Patricoo now owns a painted cutter.

After nearly two years of being an officer in Otherwhen, Patricoo grew ambitious and started his own crew called Traba Venator. Traba Venator is latin for The Ship Hunters, the name suggested by his hearty Waugh. Patricoo is currently establishing the crew with the intent to join, not create, a flag. He also helps as a manager at There is No Spool at Beta Island.