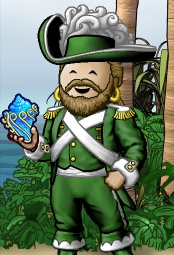 Lordkalvan is captain of Otherwhen, prince of Water Sleeps, and governor of Beta Island. He usually runs a war brig pillage on Mondays starting around 4:30pm Pacific.

As governor of Beta, Lordkalvan has encouraged commerce in Sapphire by keeping the tax rate reasonable, hosting events designed to bring participants to Sapphire, and having the palace trade limes and passion fruit at prices designed to encourage both foraging and trading.