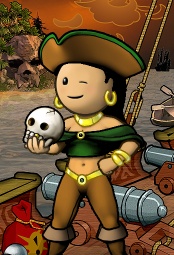 Nikity is a dependable and loyal senior officer of the crew Outlaw's and captain of the crew Unsung Buccaneers, now used as blockade crew for the flag. She ports at Wensleydale on the Sage Ocean. She works hard and managed to practice all her piracy skills and became knowledgeable in most aspects of the Sage Ocean, thanks to the YPPedia, her first captain Drhou and her friends in the flag Outlaw's.

Nikity became a pirate at the Sage Ocean in May 2006. She started on Wensleydale, lived at Lincoln Island for a while but now she has a cottage. Her little cats Nixy and Lixy follow her everywhere.

She has found her way between all the pirates, practicing her skills and battling her way through the puzzles. She became legendary at bilge first, but kept try to improve all her piracy skills. She noticed that she gave her captain (with his cleaver) a hard time although she managed it with her first foil, so she gained some good advise when her foil dusted and she bought herself a falchion. Quickly she was defending herself against skellies with success. After a lot of practice she suddenly noticed she became legendary at sailing too. Carpentryhas been able to drive her mad when she had to do that task for a while, but finally even that skill is improving quickly. She practiced her leading skills at pillages as commanding officer, and she is known as a nice, patiently, understanding commanding officer who is not afraid to give some lessons in teaming at sea battle, or... to make annoying lazers to walk the plank. But... even though she's now able to navigate a ship into battle, she prefers to help on stations that are more familiar to her. Not the lacking of skills but of confidence is what keeps her from moving up the ladder to the crow's nest. Soon when she feels that the time is right she shall claim what's rightfully hers. Her next goals are to memorize the routes at the ocean, and finally make some work of taking a pillage out herself successfully...

Her first crew was Unsung Buccaneers, where her captain Drhou challenged her with quick promotions. As soon as she could buy her first pirate badge, she was promoted to officer, so she buried herself in the letters of the Yppedia to be able to proove she was worthy to be officer already. Before she knew what was happening, she was part of crew-management, became involved in flag-issues, and did her first pillages. She made it to senior officer, but than her beloved captain plus his first mate disappeared, and in search for PoE she jobbed until her flag members at Outlaw's convinced her to improve her skills further in their crew.

Proving her abilities to her superiors (again), she became a princess and senior officer. An alt-pirate of her didn't wanna leave her first crew dormant and became captain. That crew is now used as blockade crew (and training crew) for the flag. and has led ships to sail through the Ocean. But even though she's now able to navigate a ship into battle, she prefers to help on stations that are more familiar to her. Not the lacking of skills but of confidence is what keeps her from moving up the ladder. Soon when she feels that the time is right she shall claim what's rightfully hers.