Navigation is one of the duty puzzles, typically reserved for officers in the crew that owns the ship. Other players may also be ordered to navigate by such an officer. If they are ordered, they can also change the course of the ship. There are two 'flavors' of navigation, usually called Duty Navigation (duty nav or dnav for short) and Battle Navigation (or bnav). A pirate must have a subscription on the subscriber oceans in order to be able to play either puzzle. (See also Navy Mission Requirements).

Duty Navigation multiplies the effectiveness of a ship's sailors, and allows memorization (or "memming") of ocean leagues. It also affects the type of enemies that a ship will spawn. As of the March 2007, better performance at Duty Navigation will increase the likelihood of encountering spawns set in the voyage configuration.

Release 2007-06-14 confirmed that ships configured for trading and flotilla attacks would spawn fewer enemies with good duty navigation. This spawn reduction also applies to the evading configuration, introduced with release 2009-04-07. Behaviour for the sea monsters configuration is undocumented, but assumed to be the same(verify). 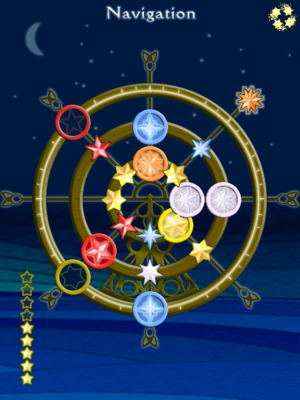 Navigating involves lining up specific patterns of pieces on a circular board. There are three concentric rings, each with eight positions around them (up, down, left, right, and diagonals). Random stars fall towards the middle, starting on the outside. The player can control the three rings, selecting one and rotating it (and the stars it contains) clockwise and counterclockwise. Stars with nothing "underneath" them will fall towards the center. Lines of three or more stars of the same color, either from the center out or along a ring, will disappear. The primary goal is to line up appropriately colored stars in the marked positions, forming a "constellation" which will then disappear and be added to the score. Simply lining up same-colored stars does little to increase the score.

Booching in navigation, or dropping a star on top of a star in the outermost ring, will cause the ship to turn around and the pirates on the ship will be told that the navigator just booched.

Because it is not possible to know which constellation is coming next, the key is simply to be as efficient as possible. It's also a good idea to keep multiple colors of stars on any level as it starts to fill up, both in case the next constellation needs it, and so that there are multiple options available if the board begins filling up and it becomes necessary to line up stars to free some space.

When beginning duty navigation, the best way to get the highest possible scores is to create a combo that fills in the constellation. This is difficult to do but the bonus is extremely large. This trick is probably too much effort to be used anywhere other than an attempt to get to the top of the Ultimate list.

A player who is new to duty navigation is likely to get bad scores (Poor or even Booched) because the scores are strongly weighted on the number of stars in the constellation that was completed. The constellations in the first couple of levels have only one or two stars and hence it is only possible to score very low, even if they were to be completed with the fewest possible moves. As a player advances through the ranks, he or she will find it easier to reach the higher scores as the number of stars per constellation increases.

This is the commonly used term for the sea battle puzzle, where a commanding officer controls the movement and firing of guns in a live battle with one or more other ships (also see blockade). The player who most recently selected Navigate from the ship's wheel is automatically put in charge when a battle begins. Others may take the helm by selecting navigate from the wheel. This immediately switches control to the new player.