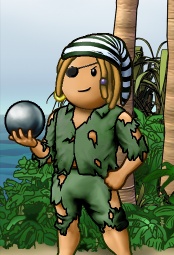 Naploen has been playing since 2006. His first captain on Sage Ocean and long time friend was Kkev; his second captain was Outlawman, another long time friend. Naploen is a poker player and merchant who constantly has a lust for poe and rare items. He currently only helps one flag for blockades; any other flags who ask him will be charged.

Naploen was a pirate on the Sage Ocean. He was a senior officer of the crew De Ja Vou.

Naploen has been deleted in an attempt to quit and still plays Puzzle Pirates. He regrets it for his loss of jolly rogers. Deleted in early 2013.

Naploen is now a captain once again on Emerald Ocean. He is the founder of the crew Naploen's Empire V. Currently a small crew, probably going to be like that for some time until very trust worthy people come along.