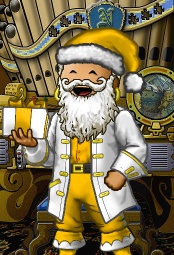 Montag is a pirate on the Sage Ocean.

In German, Montag means Monday, however this was not the basis for his naming. Montag is also the principal character of the fiction novel Fahrenheit 451 by Ray Bradbury in which firemen burn books in an apocalyptical future so political thought and philosophical freedom don't exist. The guy learns to read while the plot advances and joins a bunch of hippies in the end and quits his job. It was from here that he copied his pirate name. The former fact was noted early to Montag by his mates in Swashbucklers of Sage and is still, sometimes, called Monday. Montag isn't german in real life, though.

Montag loves the game at its core: the puzzles. Carpentry, Navigation, Battle Navigation and all crafting puzzles are the most enjoyable; it are fact. Also, he is decent at Sailing, although he doesn't like it since he finds the puzzle boring, exhausting, and, as stated once by BA, it makes your eyes bleed. He considers himself unskilled by nature at parlor games; patience issues, mainly.

Almost everything he used to do when logged on was pillaging, usually on his sloop, the Victorious Emperor, or on other hearties' or flagmates' pillages. Even although he owns at least 100 vessels, including his second favorite, Ragnarok, he kept using the Emperor, mainly because he got used to it.

As much as he wished it, his pathetic old excuse of a computer didn't allow him hopping into anything bigger than a war brig without miserably failing, nor allow participation in blockades. Thus, he didn't ever specialise on big ship Battle Navigation. That was, of course, until he bought a new one; then he beat the crap out of the old one.

For months, he didn't know about the revenge mode of the brigands after a last second move (A.K.A. LSM) that was avaliavable back in 2006, forcing him to find another way to Battle Navigate. Still, he adopted it after watching its efectiveness, although he still inflicts damage without it. He thinks LSM should be forbidden or limited; afterall, the top ten Ultimate list in Battle Navigation is actually the top ten list of the pirates that have enough free time to LSM over 9000 times a day.

Montag's knowledge of English wasn't advanced and, as stated above, he is impatient. So he didn't know that pieces could be flipped in Carpentry until he slowpoked at paragon experience; this led his breathtaking MP^3 maximum score to new heights. How patience is relevant to this fact is probably due to the tl;dr nature that the tutorials have.

Montag started out his pirate life in late December 2005. He saw Y!PP for months on the top ten played games in Miniclip, and decided to try it out.

Being more greenie than average Joe (since his knowledge of English was very poor, and still is), he wandered around without actually knowing what he was doing. Montag joined pillages, crews, the navy, walked into the docks, doing everything without having an idea of what it was all about. Still, he was caught by the game, especially for the Carpentry puzzle.

He joined and left many crews, also without knowing what a crew was, and finally, after getting some kind of idea about the game, he joined the Swashbucklers of Sage in the flag Notorious, and stayed there as he was taught the basics of the game, in February, 2006.

Quickly increasing his stats after an effort to make them look decent, he discovered how easy Sailing was, how fun Carpentry is (after discovering pieces could be flipped), how hard Bilging was and how genius Distilling is.

In March, after being recommended by captain Saluteme, he joined Notorious officer's training crew, the Notorious Dreamers. By this time, he had more knowledge of the game, but he still took over 9000 months to know how to be a decent officer and pillager. While in this crew, he bought his first ship, a sloop, the Fugly Pike. He didn't like the name, and soon he renamed it to the Magnificent Pike (renamed again some months later and still Montag's favorite vessel).

After being bugged by Saluteme to re-join the Swashbucklers, he gave a farewell to the Dreamers and rejoined as an officer. In early July he started his dream of memorizing the Sage Ocean. When he was at the Dreamers, he saw his decent skill at Navigation, dormant since May (seriously, how do I remember this stuff?). On July 20th, just over 9000 minutes since starting, he memorized it all, being the second pirate in the crew to achieve it. By this time, he achieved fleet officer rank; this was of course before the introduction of the queer hats. After booching his standing in Battle Navigation while memorizing, he started to pillage a lot, and achieved ultimate in the following month.

On October 2006, Montag started thinking of searching for a new crew, since he didn't liked the way Notorious was evolving (noob-a-lization), and also because his pillages were almost always canceled due to big pillages taking place. After a search, and learning stuff about quality > quantity, he joined Obsidian Daggers, Daggerdarla's crew, in late October. Unfortunately, and due to the lack of hearties he had, Montag couldn't pillage well in Kraken's Demise, and decided to move on in pose of something bigger but, still, skilled.

Poseidon's Tricorne was his best option and he joined on early November. As he was known to Pirata, soon he became an officer and fleet officer in less than 9000 weeks, probably for being an active pillager. Unfortunately, he got butthurt by a comment made by another officer, about his form in Battle Navigation without last second moves. He left Poseidon's Tricorne shortly afterwards.

To Imperial Crusaders and back

Following Aatank's invitation, Montag joined Imperial Crusaders in late November, hoping the crew was active enough to hold his pillages comfortably. Joining as a fleet officer, since he knew Aatank from Swashbucklers of Sage, he soon discovered that Imperial Crusaders wasn't what he was looking for and, in December, Montag returned to Poseidon's Tricorne, being his favorite crew until now with no plans to change again. In early January, he got promoted back to fleet officer.

Today, Montag can't be found, because he went dormant after playing another MMO, and his pixels got headshooted; his name, forgotten. Then, in a surprising and exciting over 9000º turn of the apparent fate, he started playing again a year after leaving, in November 2008, burned out of the grind that the other MMO's represent. Of course, some lame basement dweller was holding his name, so he created Compadre.

With a year worth of maturity, English and internet subculture learning, he quickly realized not to be a care baby about the social and grinding aspects of the game, and instead have a bash while playing. With the community of the game being composed, mostly, of kids and footbal milfs, he was quickly misunderstood as a troll on the game forums; bitches don't know 'bout my internet skills and be hatin' when they see me rollin'.

He can often be found engaged in some sort of ship activity (lol see what I did there?), mostly Atlantis trips; carpenting to the rythm of prog, losing PoE in poker, bringing internet life and culture to the game forums' native illiterates, trying to get over 9000 ultimates, watching CP, using overused memes over 9000 times, and muting anyone who clutters his chat history. Recently, when his GPU fried, his mom got scared and told him "You're movin' with your auntie and uncle in Bel-Air". He whistled for a cab and, when it came near, the license plate said FRESH, and it had dice in the mirror. If anything he could say that this cab was rare, but he said, "Nah, forget it. Yo holmes to Bel-Air!" I pulled up to the house at about 7 or 8 and I yelled to the cabbie, "Yo holmes smell ya later!" Looked at my kingdom, I was finally there, to sit on my throne as the prince of Bel-Air.

Hoping some day to own over 9000 ships, Montag currently only owns the following renamed ships on the Sage ocean: