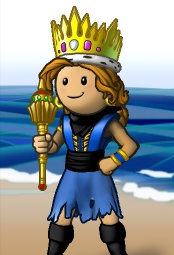 Saluteme is the captain of the crew Musketeers of Sage and princess of the flag Mushroom Kingdom on the Sage Ocean.

Her early time was spent learning from some very experienced and helpful pirates in Skeletons in your Closet (an old crew from GWTF). She later became a founding member of Swashbucklers of Sage when she helped Oldhairless and Flashbang in their break away from the now defunct Lime Green Cabbages. As real life took more of Oldhairless’s time and Flashbang, she worked on setting up her own crew, Saluteme took on more of the tasks of running the crew and flag Notorious. Oldhairless passed the captaincy of Swashbucklers of Sage and the leadership of Notorious on to Saluteme.

After a falling out, amongst the royals of Notorious, Saluteme left Notorious and is currently Captain of Musketeers of Sage and Princess of Mushroom Kingdom.