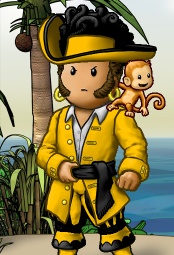 Mastodon was a pirate who was found mostly on the Viridian Ocean but could be also found on the other oceans. He was an avid swordfighter and poker player. He owned Nydam Yards on Fintan Island. He was married to Elegance on the Viridian Ocean. He was also known as Donny or Don which were his nicknames given to him by Cyndiepet.