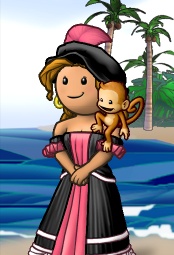 Elegance plays on all oceans except for Ice. She is Elegance on Cobalt, Viridian, Hunter, and Sage; on Midnight she plays as Elegancex. She is an avid poker player and swordfighter and has recently started drinking more. Mostly she plays on Viridian where she is a fleet officer in the crew Mercenaries with her dear friends Tristan, Cyndiepet, and Belgica. Elegance is married to Mastodon who was unfortunantely banned for personal reasons.

These are the blockades that Elegance was bnaving in.