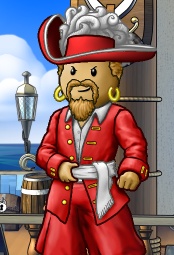 Macknintendo is currently Captain Of Spirits Of Those Fallen, member of the flag Access Denied

A Landlubber Lost in the Wild Waters of Hunter Ocean

Macknintedo started his pirate career late January of 2007 along with Sunnysmile, and was introduced to this ocean by Caitlinsmile formerly known as Sarahsmith. He was intrigued by the thrills of a pirate life and was looking forward to getting his sails underway and explore the ocean. So Macknintendo tried his best to learn how to pillage and everything he could about the duty station and as soon as he thought he was ready Macknintendo sent forth in search of a crew. He joined a War Brig pillage led by a pirate named Spiritual and during that pillage he knew that the crew he was jobbing for was right for him. After the pillage he joined up with the crew Twisted Glory

A Whole Ocean to Explore

Macknintendo then sent forth and learned all he could about being in a crew, ranks etc. Then on a War Frig pillage led by the Captain Drayke he saw such a battle that he knew he wanted to navigate a battle. So Macknintendo did all he could to learn how he could be good at the puzzles in order to be an officer and be able to be battle navigate So he learned how to do good in the puzzles and quickly rose through the ranks of Pirate, and after a time he became what he dreamed of Officer. As soon as he got promoted he sent forth and everyday was out learning how to pillage whether it be in the navy or actually pillaging. A while later he started to get better so he started running pillages with his crew and jobbers and they went great though Macknintendo wanted to do more to help out his crew, for over this period of time he got to love his crew so much he would do anything he could for it. That time would soon come.

In the summer of 2007 Drayke left Puzzle Pirates for some private issues for 3 months and in that time Twisted Glory needed someone to be in charge. That is when Macknintendo and his long time friend Blackrippa took over Twisted Glory. They did their best to keep it afloat although from personal issues both pirates couldn't get on that often. Then Sins of the Flesh retired and they had to go to another flag which they went to Access Denied and for some personal issues Blackrippa had to step down as acting captain so Macknintendo took charge for the rest of Drayke's absence.

With The Wind At His Back

When Drayke came back he anounced that he was retiring Twisted Glory. Macknintendo was very disapionted but not discouraged for he, along with his 2 hearties Blackrippa and Thebigmattb created a crew that was in honour and memory of all the great pirates they had encountered in Twisted Glory and all around Hunter. They created a crew called Spirits Of Those Fallen and hope to have a very successful crew in the future. The crew joined Sins of the Flesh after Megami anounced it's re-opening and Macknintendo decided to help out the flag and became prince.

Sins Of the Flesh became stagnent after Megami retired it again so Macknintendo and all his mates in the flag went and created their own flag.

The Modern Inquisition has come....