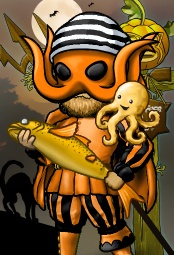 A bit of history

Squid Squad, created on the 22th june 06, was at first part of the flag la Dolce Vita when it was governed by queen Millie. After she decided to step out or monarchy, she left her place to Jothic. Under his reign, trouble started with the royals, Kagan wanted more involvement from them and better politics. Because of all that, Kagan and Msrambonette decided that it was time for Squid Squad to fly on its own...and thus, on the 7th july, Squid Squad left La Dolce Vita and Sea Wrath was created.