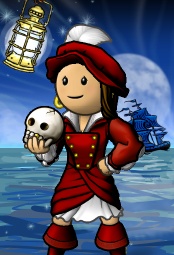 Millie began her pirate and officer career under the great Captain Minimoose in The Goodship Lollypops, a mighty fine crew, where she first met many great hearties, including Margain, Saffire and Asran. Millie, Margain and Asran independently joined Queen Anne's Revengaok as senior officers. A short time later, Millie, Margain and Asran independently returned to The Goodship Lollypops as a senior officers.

On 9/11/05 Margain and Millie decided it was time for a new crew, hence the first breath of the Ocean Raiders, with Margain as captain, Millie as first mate, and Asran as senior officer.

Upon researching many, many flags, Margain and Millie chose to fly under the flag of The Armada of Angels after meeting the kind and great King Amantino, who has since become a dear friend. Millie served as royal and then as Minister of Internal Affairs. In the Armada of Angels Millie met so many wonderful hearties, along with her best friend Rudoc.

Once again the Ocean Raiders decided to form a new flag, La Dolce Vita, in which Millie humbly serves as queen. Many great pirates have come together in which to pledge their support to the success of La Dolce Vita, a true family of experienced pirates. La Dolce Vita currently stands Illustrious and #3 in flag fame.

After many battles, on October 29, 2006 Millie honorably received a battle scar and is now missing an eye.