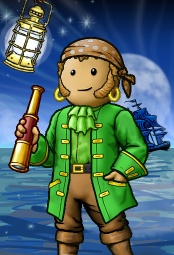 Jonesmelad started by spending some time in the navy learning how the various puzzles worked, so that the lack of knowledge caused by his newness to the game would not adversely affect other players. Once he had gained sufficient confidence in his skills he started jobbing for crews, and looking out for one that would be suitable for joining.

The Irish Heart Land seemed to fit the bill, with a booty division policy that rewarded the higher ups in the crew, and an easily accessible promotion policy. Within two weeks Jonesmelad was made an officer, leading several pillages, originally using sloops designated as crew ships, but soon buying his own.

The Irish Heart Land was not doing too well as a crew however, despite an influx of some new blood brought in by the pillages Jonesmelad and a few other new officers were bringing in. As such the captain posted an issue declaring his intention to dissolve the crew, and informing his crewmates that they would be welcomed by The British Eagles, a fellow crew of the Scuppering Seven Seas. This was before crews could merge automatically, and as such pirates had to gain the trust of their new crew before they could be promoted to their previous ranks.

Jonesmelad managed this easily, joining the crew as an officer, and soon after being promoted to fleet officer. The number of pillages that Jonesmelad ran decreased sharply at this point, with the majority of his pillaging action being on war brig pillages run by Johndigger, one of the senior officers. Jonesmelad's officer privileges were mainly used on sloop runs. Most of these runs were solo trips for memming; Jonesmelad has the entire of the Jade Archipelago memorized, including its adjacent interarchipelago routes, as well as a large proportion of the Onyx Archipelago.

After Tigerleaf Mountain was colonized, Jonesmelad opened the first stall at Iron Tiger, the island's iron monger bazaar, and concentrated on selling cannonballs.

At this point Jonesmelad was thinking about asking to be considered for senior officer, however instead he decided he could do with a break from Y!PP, and, not knowing how long it would be till he returned, decided that it would be best if his crew had the use of his accumulated wealth while he was away. Accordingly he sold everything that could easily be converted to poe and traded the rest to Dezra, then a fellow fleet officer.

Jonesmelad is still on hiatus at this point, though Flogem is an alt originally created to relearn puzzling skills and regain some finances.