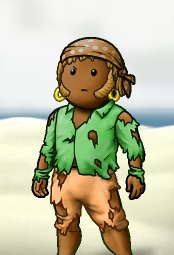 Joething is a pirate in the crew Pondera, and a member of the flag Allied Saruyama Forces on the Sage Ocean. He began playing Puzzle Pirates on November 20th, 2006.

Joething's first crew was called Sea Devils. He stayed there for a month before leaving due to a disagreement with an officer. He returned after a few days with the stats to reach the rank of pirate, but rarely pillaged with the officer again, until one month later when he needed the PoE for a badge. After another disagreement, he left the crew and made a living playing Spades.

There were many non-notable crews that he joined for few days at a time. He then joined Simple Plan for a time, but decided that he preferred card games to the rigors of being in a crew.

More recently, Joething joined the crew Pondera where he has returned to pillaging. After some politics made him a little mad in Pondera, he followed a old friends advise and followed a old captain to the lemons and limes. He is now a fun loving guy who loves dogs and cats and will run for the notice broad if pirates say the word sea and monster in the same sentence.