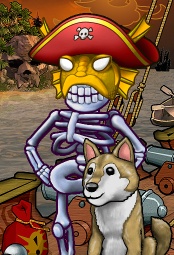 He also often updates the position of Brigand Kings for the viridian ocean, usualy every Thursday.

He gained his sea horse (Ippolito) familair, while on a Sea Monster Hunt on the 25th August 2009 at around 2AM GMT time for him.

He is currently an captain of the crew Holy Dragons.

He is currently the owner of the iron monger on Labyrinth Moors, called Sinking Fires.

Blockaded Brigs and Sunken Frigs is a shipyard located on Tigerleaf Mountain. Jackswalloms had to sell the shoppe due to a lack of customers as a result of the doubloon exchange price rising.

This Shoppe is now called Anchors Away