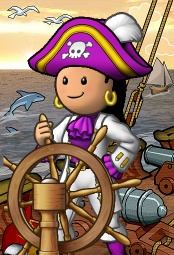 Hiroko, better known as Ko, island hops around Sage. She loves having fun with her mateys and kicking back at the inn. Her favorite hobbies are Swordfighting, playing Treasure Drop and poker. Her new found favorite game is now hearts. Her favorite puzzle is Bilging and she looks forward to earning more crab trophies.

Hiroko's pirate life started October 2005 on Sage ocean. Her brother told her to try this game so she figured, sure why not? As a greenie she had no clue what to do or what the point of this game was. There were even rumors that she tried to hold conversations with swabbies.

After much learning, she was a pirate in two crews for a short time before a close mate convinced her to join a crew by the name of Shadow Hunters. After that Hiroko eventually worked her way up to fleet officer. Under a new captain she became senior officer until one sad day the crew had no captain once again. She stepped up as captain and has been loving it ever since.

Hiroko feels very fortunate and grateful for having such an enthusiastic crew with very loyal and supportive officers. More importantly, she loves the friendships that she has with her mates