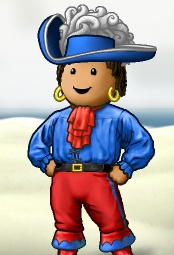 Hildebrand is a senior officer of the crew Silent Fools, and a lord of the flag Cocktail Party. He sails the Sage Ocean.

Hildebrand washed ashore on Greenwich Island in June 2006. Within a few weeks, he joined The Hungry Hungry Hippos as a pirate, and soon moved to Wensleydale to be near the rest of the crew.

As he developed his shipboard skills, he soon went through officer training, got his own ship, and was promoted to fleet officer. Meanwhile, he discovered his skill at shipwrightery, and started building ships to supplement his pillaging income. Between building ships and running pillages, he saved up enough PoE during August to buy his first ship. The Hippos underwent a crew shuffle in September, at which time Hildebrand was promoted to senior officer.

In February 2007, he joined the crew Pondera. In June, he was promoted to senior officer in that crew. In late November, he became a prince in Allied Saruyama Forces. Over the course of 2007, he developed his skill at Rumble, and beginning in November he started collecting zombie hands. Also, when Bowditch Island opened, he started a shipbuilding stall, and proceeded to demonstrate (over the next 8 months) that excellence at a crafting puzzle does not automatically translate into excellence at the shopkeeper puzzle.

In February 2008, when Allied Saruyama Forces closed down, he joined Silent Fools.

Hildebrand's name is taken from the character King Hildebrand in the operetta Princess Ida by Gilbert and Sullivan.