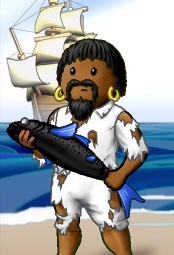 Henryw is a pirate that plays entirely on the Sage Ocean. He has a lot of fun talking with his crew mates and Bilging on pillages and especially in blockades or non-sinking flotillas.

His Crew and how he got there

Henryw used to be in the crew unwanted creatures of the flag Tide of Terror. Because unwanted creatures splits booty according to Jobber's Delight, cabin people get less money than other members of the crew. The captain, Lovelylass, thinks that people should get pretty much much the same amount of money if they are a full member of the crew, so there aren't any cabin people in the crew and there never will be until someone else takes over as captain. This meant that Henryw was accepted in as a pirate and had to climb one less rank than normal to get to his rank in the crew: fleet officer.

He suspects that he was given the rank of fleet officer because he could run pillages, run them well, and would let Lovelylass aboard his ship when he got his. He was also very nice to the crew and said hi every time he or a crew mate logged on. While he was an officer in the crew, he was given the title of drunk for being exceptionally silly in a sea battle.

Henryw was just a traveling pirate to begin with. He would go jobbing for a crew, leave it at the end of the pillage, and go jobbing with a different crew. He told his aunt about Puzzle Pirates, who started as Sweetannie and liked it a lot. Sweetannie joined unwanted creatures because she started in the Gull Archipelago, where unwanted creatures was based. They did have a war brig at Cook Island, but they barely used it at all. Henryw, however, did not start in the Gull archipelago, but in the Pelican Archipelago. Because unwanted creaures offered booty of jobber's delight, he joined. He had grown so used to leaving crews at the end of pillages that he left unwanted creatures. Sweetannie didn't like that and asked Lovelylass if she could invite him again and make him join for good. He joined unwanted creatures a couple days later as a pirate and started his climb in ranks and friendship.

Henryw got his ship near the end of his life in unwanted creatures. He went pillaging in his own ship until he earned 30 doubloons, which he used to buy a captain's badge and start his own crew, which he named WORMS. About ten minutes after he made the crew, he suddenly had the thought that people wouldn't join his crew on accounts of the fact that they'd be considered worms. This proved false. His crew now has a good number of pirates in it.

When WORMS achieved the fame level of noted, both Henryw and Lovelylass were finally online at the same time. Because Lovelylass was royalty in Tide of Terror, she invited WORMS to join. They did, so she made a flag broadcast that said "welcome to all the little wormies that joined us!"

WORMS no longer exists now, having merged with the crew PHOENIX.