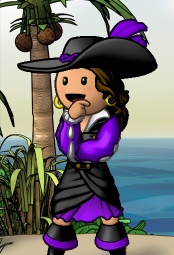 Gummyworm is a pirate on the Midnight Ocean. She is currently a senior officer and the tactician of the crew Pirates of the Damned and a member of the flag Crimson Tide.

Gummyworm started her Puzzle Pirates career as a beta tester on Azure Ocean on August 23, 2003. She found her first home in Radical Dreamers of the flag Dream Reapers. Upon the opening of Midnight, she stayed with the Radical Dreamers and sailed the high seas of Midnight Ocean. There was a short break in her stint with the Dreamers where she created her own crew called the Booty Spelunkers, but returned and received the deed to the Apparel Barrel (the beloved crew shoppe). The highlight of the flag achievements was the capturing of Angelfish Island on November 6, 2004.

Upon the decline of the Dream Reapers, Gummyworm relocated along with fellow crew mates and Angelfish Island to Elysian Fields on March 14, 2005. However, this marriage was not meant to be and once again relocated. This time, to The Uprising on May 3, 2005.

Once again, Gummyworm and Angelfish saw the dramatic decline of a flag and decided to find their hopefully permanent home in the great flag of Crimson Tide on February 6, 2006.