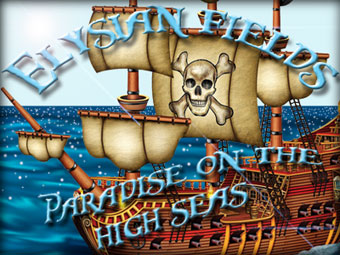 Elysian Fields is currently a dormant flag of the Cerulean Ocean originally of the Midnight Ocean. It was founded on 11 October 2004

"There is nothing--absolutely nothing--half so much worth as simply messing about in boats."~Wind in the Willow by Kenneth Grahame

And those that have three times kept to their oaths, Keeping their souls clean and pure, Never letting their hearts be defiled by the taint Of evil and injustice, And barbaric veniality, They are led by Zeus to the end: To the palace of Kronos, Where soothing breezes off the Ocean Breathe over the Isle of the Blessed: All around flowers are blazing with a Dazzling light: Some springing from the shining trees, Others nourished by the water from the sea: With circlets and garlands of flowers they Crown their hands, Ruled by the steadfast councils of Rhadamanthys: Rhadamanthys, The great Judge, (from wiki http://en.wikipedia.org/wiki/Elysium my teachers would be proud lol)

So you have been judged worthy to enter these fields by the three great judges Minos, Aeacus, and Rhadamanthus. Welcome my friends for you have been choosen by the gods themselves to be here in this wonderous place.

Have you the right to be here with us here in Elysian Fields?

Nobility of the flag

In fall 2004, Quixaroo started the flag Elysian Fields. It was made up of crews who were united for the purpose of attacking Namath Island. Not long after, dissent arose within the flag. Some people didn't agree with decisions Quixaroo made. This, and the fact that the flag had already waited months for the opening of Namath by the Ringers, resulted in Elysian Fields finally falling apart. Many crews left and the flag eventually asked Quixaroo to give up the monarchy. After some arguments with the flag, she left and a new monarch had to be elected. The new king was Honeybeard, of the crew The Templars, who took over from temporary monarch Faust.

When Namath finally became open for blockading in July 2005, Elysian Fields didn't have the required fame to blockade it. So sadly, the goal that the flag had been brought together for to begin with wasn't attainable at that time. After a couple of months, Honeybeard couldn't spend as much time as needed for the tasks of a monarch, because real life demanded his time. A new monarch had to be chosen by the flag again. Two candidates stepped forward, Fallen of Templars and Ladiesman of Dark Water, one of the smaller crews of the flag at that time. Ladiesman became the new King and the Templars left the flag.

The departure of the crew was a shock for the flag, because the Templars had been the richest and most powerful crew in the flag. But Elizajean of the Templars stayed in the flag with a new crew, Celtic Raiders. Under the reign of Ladiesman, the flag's goals changed. It was intended for Elysian Fields to become a flag of friends, where people would feel welcome and enjoy being there.

After four months, however, real life intervened and Ladiesman had to step down. He recommended that royalty choose Elizajean as the new monarch. It was an unusual step, because the new monarch should be elected and the old monarch shouldn't have a say in the matter. Some of the crews disliked this and demanded an election. Elizajean immediately agreed to this, but still trouble began to brew in the flag.

At that time, Honesty said she had interest in the throne, too. Because Elizajean and Honesty shared the same goals, ideas and hopes for the flag, they agreed to be co-monarchs of the flag. That decision came to pass in January of 2006. Partly because of the disagreement over new changes in the flag, but primarily because Monkey Militia had other goals than the flag had, they left. Dark Water remained as the last crew of Quixaroo's original flag. Honesty and Elizajean were left to build the flag up from scratch. But sadly, after only a few month, Honesty decided that the game didn't hold the pull on her it used to and she resigned as co-monarch and left the game.

In June of 2006, Elysian Fields won Frond in a blockade against Marauders Pact and Ars Piratica. After some months, when other crews had joined the flag, the fame rating hit illustrious and the flag decided to attack Ostreum Island in December of 2006. They won convincingly in three rounds, beating Superlemon Krakatoa and The Pack.

In August of 2007, Elizajean has announced that she will be stepping down as queen. She was an outstanding monarch and the longest reigning monarch in the flag's history. Surfie of The Get of Fenris and Isabellgrace of Red Herring stood up as candidates for the throne, and Elysian Fields had the election. For the first time, not only did the Royal Council vote, but so did the Titled Members of the flag. By one vote, Surfie won the election, and became the next queen of Elysian Fields. Elizajean retained her monarch status until October 6th, when Surfie was officially crowned with an event, Surf's UP!