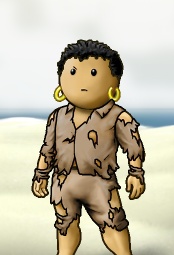 Frontguy is the captain and swordsman of the crew Frontline Fighters and king of the flag The Frontline Fleet. He sails the Meridian Ocean.

He was originally from the Viridian Ocean before the ocean merge. After many weeks of crew hopping he decided to stay with a smaller crew called Back In Black. He is well known throughout the pirate community and his crew, only recently has he decided to take on the role of a greeter and give something back to the game that has provided him with many hours of fun and enjoyment. Lately he spends most of his time in the inn playing Swordfight (which he currently holds at a legendary level) or he is on a citadel run helping out doing Carpentry.