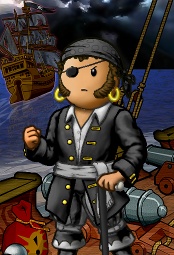 Fishandsail is a pirate on the Viridian Ocean.

Fishandsail, also known as Fishy, started playing in the summer of 2005. He joined the crew Chosen True, and stayed there with his fellow mate Blackmaria for about eight months. He reached the rank of senior officer.

After eight months, he decided to move on and join a new crew. He joined Screaming Banshees, of the flag Deadly Reunion. He stayed there until he became a fleet officer. He and his fellow mate, Cullough, decided to make a new crew and join Deadly Reunion. Cullough and Fishy created what is known today as Viridian's Secret. He stayed with his mate Jonzo and Midnightmoon in the crew Moonlit.

After staying there for about five months, he decided to find a new crew. He hopped from crew to crew, finding the right one. He became a fleet officer of The Flying Corsairs, before becoming a pirate on the crew Midnight Aurora, where he resides today.