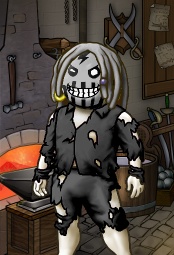 Fedorov is the captain of the crew Voodoo People and the count of the flag Undertow on the Cerulean Ocean. He is also a captain in the Midsummer Navy in the Ruby Archipelago.

When Fedorov arrived on Midnight Ocean, he joined The Blackwolf Marauders of the flag Victory Raiders. Just after one day there, Fedorov realized that structured system and rules is something he didn't want, and went on to being an independent pirate.

As time went on, he found a couple of mates that allowed him more room for creativity and eventually became a senior officer of the crew Curse of Fatal Death and the lord of the flag Black Curse.

Some more time passed on, conflicts and disagreements about politics started to affect the crew and Fedorov was once again on the road. This is when he decided to form his own crew by the name of Voodoo People. Shortly after, the crew joined a flag by the name of Otherworld. This is where he received much of his education on many aspects of the game. Shorty thereafter Fedorov was ready to make his own flag.

Fedorov formed CCCP on June 19th, 2010. The flag name was changed to Undertow in 2012, after the Midnight and Cobalt oceans merged into one. Undertow enjoyed tremendous success in the blockading game since then, mostly in an interfering and provocative style of play.

In recent times Fedorov has been spending his time on Emerald Ocean and Obsidian Ocean.