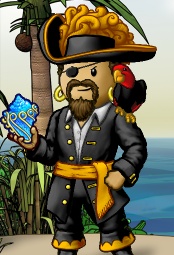 Emerson is one of the winners of the Design the Oceans Contest.[1] His excellent design work can be seen at the following islands:

In addition to the above named islands, he also created one large island for the Cursed Isles as well as four expedition islands.

Emerson was the creator and maintainer of the Yohoho Tools Patcher. Note this is no longer used as Yohoho Tools now updates itself regularly and correctly.

In his piratey life, Emerson can be found on all oceans, having started each one on opening day. He is currently most active on Sage, occasionally on Hunter, and rarely on the other oceans. Preferring duty puzzles over carousing, he remains at sea nearly every minute he is awake.

Emerson first made his appearance on Azure at the time of the second beta release, and joined the crew Green Oysters, under the command of Captain Cartier. He learned much from this excellent captain and crew over the approximate 5 months before Azure was lost to Davy Jones, and he was forced to migrate to...

Emerson hit the ground running when Midnight came online. First he joined the Envious Bivalves, which was Green Oyster's followup crew, but when it turned out that too many mates were not returning to the crew, he found himself given command of the training crew Elysian Few flying the Nyx's Scions flag. After training several outstanding pirates, some of whom stayed with the flag, he eventually burned out and joined ARR as a senior officer, where he has remained ever since, serving additionally as a Lord of Phobos Et Deimos.

When passage to the Sage Ocean was first discovered, he immediately set out in search of fame and hopefully fortune. Luckily, he came across a new crew with a skilled and enthusiastic captain: Hell's Angels, headed by Captain Helystra. With his extended experience, Emerson was quickly put in charge of training the crew and pillaging any and all upon the high seas to fund the growing crew and flag. His abilities also contributed mightily to the first blockades on Sage, resulting in victories in three of the first four blockades his flag participated in, and enjoying future successes as well.

Eventually, most of the crew of Hell's Angels passed beyond the horizon, retired, or moved on, and Emerson found himself once again more or less alone. Random jobbing eventually resulted in him joining Disillusioned, another old and experienced crew of close friends, which is where one can find him today.

Not much is known as to why Emerson wound up here, sailing these seas as often as he does. Other than the usual initial excitement of a newly discovered ocean, there wasn't much keeping Emerson here until one day when he assisted a pirate new to the shopkeeping game. At some point, Emerson was made manager of the stall, and it flourished for a few months until the owner disappeared to points unknown. Emerson continued running the stall, expecting the pirate to return... but he never has. So, most of Emerson's meager fortune has been created by hanging on to the shop, which even ran successfully for over 10 months totally untouched as his real-life alter ego was deployed overseas.

Emerson is one of the original player island designers, and has been a role model for newer designers and many more new hopefuls. He has also been first hand in creating the Island Design Guide, as well as creating an easy to download and patch tool for downloading the Yohoho Tools which was used often before the code was finally fixed to update itself. A prolific contributor on the forums, he can frequently be found posting in almost any global board.