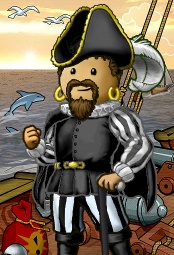 Dmentd is a senior officer and first mate of the crew Great White Dugongs and lord of the flag World of War.

When Dmentd washed ashore in February of 2006, he roamed the ocean for over a month, before being recruited as a fleet officer in Koolios Kroo in the flag Serpientes Del Mar. After a couple weeks, he and his hearty Ktgdf started their own crew which were to be named Sighlent Dreamers. This crew also joined Serpientes Del Mar, but soon died off as his friend Ktgdf had gone dormant. After meeting Cutthraot in a spades game, the two became best friends and created a crew called Freya's Valkyries under the flag Dreaded Dream Makers on April 5 2006. Dmentd captained this crew for about 3 months in Cutthraot's absence, and joined the crew into the flag Shadow Knights. In October of 2006, Dmentd joined the crew Last Sunrise, with his hearty Strawman as captain. When Strawman left, he assigned Dmentd to be captain. Over worked with flag duties, as Dmentd were the Head of Navy in his flag, he decided to merge the crew with Great White Dugongs with his hearty Flyinnorth as captain. He is now senior officer and 1st mate of Great White Dugongs, and has even had his share in captaincy (as he caused a mutiny as a prank while Flyinnorth were on vacation). Dmentd busied himself with flag funds and shoppes as the Minister of Industry in Shadow Knights but is now a Lord in World of War. Though he's settled down, pillaging is still in his blood, and every once in a while you can catch him on his war frig steadfast at the helm.