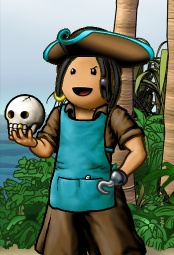 Dettol was washed a shore the beach of Sage in early April of the year 2006. He began his pirating life wandering confusedly around the crowded docks of Admiral. A very helpful/friendly pirate must have been aware of Dettol's confusion, he wandered over and began talking to Dettol, the name of this friendly stranger was Kleenex - who was captain of the crew, The Hearties Of Sage. Kleenex invited Dettol to be a member of this crew, Dettol accepted with delight.

Throughout Dettol's greenie period he worked continuously hard to improve his stats and gain a full understanding of the world and ways of pirates. To help Dettol gain this knowledge and experience there were many helpful faces willing to help Dettol. Fildendron was one of the many faces, he was the senior officer of the crew, another pirate which helped was Barbarellabe, she was also senior officer of the crew. The pirate which helped Dettol most was Kleenex. Kleenex showed Dettol the ropes of being a pirate- what's acceptable and what isn't, and also tutored him in the many puzzles in which are in the game. Kleenex and all the other crew members grew to be very good friends of Dettol. Around the same time Dettol joined, a pirate called Minaa had also joined The Hearties of Sage, both being newcomers to the game they became very good friends. Dettol then had the privilege of meeting Scaggiato and Anamii, this witty duo were also to become good friends. Many months later Dettol met a pirate called Haribo. Dettol recognized Haribo's confusion from when he himself was a newcomer. He offered Haribo a job with The Hearties Of Sage, he was welcomed like any newcomer, with warmth and friendliness.

When Dettol got to grips with the game he began to become more adventurous, pillaging and drinking were amongst his favorite pastimes, but most of all he enjoyed the random conversations held by his beloved hearties.

Due to circumstances The Hearties Of Sage disbanded along with Gold Rum and Glory disbanded on July, 9, 2007.

Following these series of events, Dettol along with Anamii and Scaggiato, and two new friends, Seasarah and Cruarch created a new crew, The Editors.

In late November, 2007, The Editors merged with Whatever Floats Ya Boat, where he made many new friends including a particular good friend Greenfish.