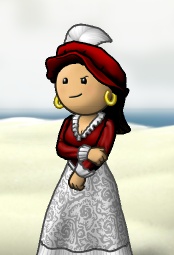 Minaa is a fleet officer of the crew Knights of Saint George on the Sage Ocean.

Minaa journied to the Sage Ocean many times, a lost wanderer in search of a home. She joined the navy in hopes of making friends but alas she did not. There were many times she almost lost her life in the navy, it felt as if someone was trying to delete her because she didn't feel like venturing out (or log in for that matter).

One day while walking around aimlessly as sometimes happens to what some call a greenie, she came across a notice board, on it was a sign "The Hearties of Sage are in need of Jobbers - inquire Immediately!"

Her stomach made a noise, the kind of noise one's stomach makes when it's empty and begging for a small morsel to fill it. "Well I need the poe", she thought, "I need to eat!"

She boarded the ship and handed over her naval papers to the the commanding officer, He was a tall pirate with a face full of hair and very tan skin, you could tell this pirate spent all his days in the sun. His name was Fildendron, he was a senior officer of this crew The Hearties Of Sage and had the kindest face a stranger could hope to meet.

He offered her a job along with a few other scurvy dogs and out they went to the sea. While they were out Fildendron noticed Minaa was a hard worker, she did as she was asked without arguement and even offered assistance in other places without being asked. "What a hardworking Lass", Fildendron thought with a smile, "I think I'll ask her to join the crew."

Minaa's head hung low doing her job she was hungry and tired but she never complain not once, not about the blisters on her hands or the pain in her back and she never bothered to ask when she'd be paid or if they'd let her at a task she'd never done before. Fildendron walked over at the end of the pillage and asked her if she'd like to join up with the crew.

She tried to smile but her face wasn't use to moving like that, it almost hurt to smile infact it did, but she smiled and smiled big. "I would love to join your crew" she replied. Fildendron said "Just keep working hard and you'll do well and I'm in no time you could be an officer as well, we're all very friendly and I bet you'd enjoy being in our crew", and he was right.