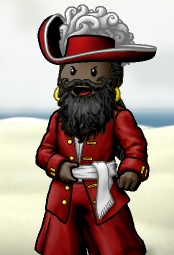 Fildendron is captain of the crew BOOTY BUCCANEERS and king of the flag Gold Rum and Glory on the Sage Ocean.

Four score and twenty years a greenie named Fildendron joined a large crew. Unfortunately for him it was an evil, dictatorship crew that worked pirates to the bone. No promotional aspects unless you passed a gruelling test and met very strict standards. He was going nowhere fast.

Then Fildendron coincidentally happened to meet a dashing pirate in red named Kleenex. After a very brief talk of the appalling conditions and a plea for help, Kleenex exclaimed this was not right and promoted Fildendron to officer. Kleenex had an eye for potential and greatly valued loyalty.

An eager pirate Fildendron took his lead from the mentorship of his now king of the flag, Kleenex. From meagre beginnings Fildendron bought a ricketty sloop Dangerous Sild and started carving up ships across the archipelagos.

Over the years Fildendron had developed into a strong, wind-whipped, hard leather-skinned pirate who demanded a lot from the crew. Fildendron had become a formidable foe to enemies, gruff and sometimes scary. And that was his good side.

Fildendron became a ruthless, lone shark, travelling archipelagos all over the Sage Ocean many times. A pillaging pirate, merchant and explorer by day and ruthless businessman by night, he now keeps the company of loyal, hard-working, fun-loving pirates who want to go places above all else.

Fildendron left The Hearties Of Sage on February 10th, 2007 and created the crew, BOOTY BUCCANEERS, Fildendron joined the flag, Gold Rum and Glory, where he resumed his role as King.

He has new life-long hearties like Minaa, Anamii and Kleenex.