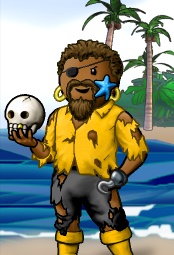 Deathguise was captain in the crew Fury of the Storms which hailed the flag Blood Rose within the Sage Ocean. Now he is part of Freebooters Gangway as a senior officer.

Deathguise has been with the game for about two years and he has joined many crews along the lines. He has worked his way towards a getting crew and will soon be creating his own. He has received three of the four injuries which are the hook, the starfish and the eyepatch. He is also a greeter. He looks forward to updates and events which he can participate in and competitions he can "strive in". He could not have done it without his friends who kept with him and jobbed him. He is part of Zombie Exterminator Sage Team and Skellie Hunters Across Sage. The story of the pirate Deathguise... Deathguise was once a calm pirate as everyone else until his hunger for power made him lose control and take on crews one by one to find out everything he could about them and finally add them to his weapons of destruction. Eventually he got bored with many crews and decided to make his own crew and bring them up to the ranks in which they should be at! Deathguise is the BIGGEST Cursed Isles and Atlantis pirate one will ever see: he's always on one.

Deathguise has lived in Sage Ocean for 3 years and counting. He would love to say that it's been great getting to know all of my hearties. All of them have been great to him and his career as a pirate. He's always dreamed of making the ocean/world a better place and slowly is doing so. With all support and help he can get everyone to be nice/happy and not disrespect those who are equals. No one is better then anyone else stats do NOT matter to him so don't say such and such is better then his because he doesn't care. This statement is true forever. Live your life.

Deathguise has joined many crews and made himself known. He started as a lonely little green named pirate and joined many pillages gained his rank in everything and made everyone he came in contact with him a better person all around. Some of his past crews might not remember him or vice versa. Some of them are...

You all were great and supported to him, he'd like to thank:

Deathguise is always doing something from running pillages to being on Sea monster hunts. Since he is a greeter any questions that need to be answered will be answered to the best of his ability since he is a 3 year old pirate. His ability has grown over the year and it's all known that he runs solo pillages for time to time join him and the Confederate Angels together we will take over Sage ocean! He has spent much of his time on this ocean it's great join him greet him... meet him... or Fall!

Over time his collection has grow and is growing.