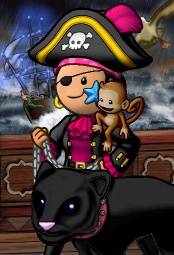 Klady is a captain on the Emerald Ocean.

Klady began her pirating journey two years ago, and has had an adventure ever since. Like every pirate, she had her ups and downs to get to where she is today. Her advice is to stay by friends because they last longer than PoE. Klady is a fun-loving, caring and compassionate pirate. She cares about everyone she meets and doesn't want to be anyone's enemy. She can give anyone many chances even though they don't deserve it. She keeps pirates up when they are down, is a great listener, and gives great advice. Klady in the opinions of many is one of the most respectable and beautiful players of Puzzle Pirates, her forgiveness and loving kindness to all players is sometimes forgotten, but a good act is never wasted, which means nothing of Klady's has ever gone to waste. She loves doing all sorts of things with her crew such as pillages, flotillas, blockades, Cursed Isles, Sea Monster Hunts, Imperial outposts and Viking expeditions. She is excellent at many puzzles as well.

Klady is the founder and current captain of the crew Satisfaction, which is a crew in the flag Visionary Fantasy. She is a princess of this flag. Klady, with the help of her officers, has brought her crew fame up to illustrious, and can be found in the top five on the list of top crews on Sage Ocean. Her crew is based upon the values of friendship, pirate skill, and fun! They love doing all sorts of pillages, flotillas, blockades, Cursed Isle runs, Sea Monster Hunts, Imperial outpost raids and Viking expeditions. Klady will always be remembered from Bristol England.

Gypsy was won in the spring green promotion.

Munchkin was won in a Sea Monster Hunt one lucky day.

Love here was given to Klady from her close friend, Tonite, when he quit playing Puzzle Pirates.

Charles, Asmodeus, Devotion and Divinity were bought with hard earned PoE from the inn.

Klady never knows what her future holds, good or bad. Although she has learned she can enjoy the good with friends, and gets through the bad with them. No matter what, they are her sole values, and she will always, be there for others because no matter how dark or strong the storm, there will always be an end when the sun comes out. She'll also always have her crew too, always reaching for the top!

Klady will never be forgotten in Bristol England

Klady's Trinkets on the Sage Ocean