Dead in the water

For the Cobalt Ocean flag, see Dead In The Water. 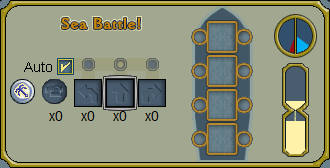 A ship with no moves is dead in the water.

Dead in the water is a phrase used to describe a ship that has run out of movement tokens in a sea battle, usually when bilge water and/or damage is high. The phrase comes from the English idiom, which is used to refer to something that is not going anywhere, and is not making any progress.

In a sea battle, sailors and riggers produce movement tokens, which allow the ship to move forward, turn left, or turn right. The higher the vessel's bilge water, the slower the movement tokens are generated. While a battle navigator may save movement tokens from turn to turn, they will eventually disappear if left unused for five turns. A tool tip is displayed by hovering the mouse over each token type in the battle navigation window. This tip indicates how many tokens of that type will be discarded if unused for each turn.

If no move tokens are available to the battle navigator, the ship cannot move of its own volition (or dead in the water) until more move tokens are generated. Note that it may still be pushed by other ships, winds or whirlpools on the board. The time it takes for a ship to generate more move tokens depends on several factors, including the ship's bilge level, and the ability and number of sailors working on the ship, and other things such as rum sickness and the impeding effect of the fog in the Cursed Isles. The bilge level on a ship rises with damage. In this way, damage also influences the generation of movement tokens on a ship.

Another use for the phrase applies to ships sailing on the open ocean - if no pirates are on board, they remain stationary, or dead in the water. When this happens, it is also known as abandoning ship.