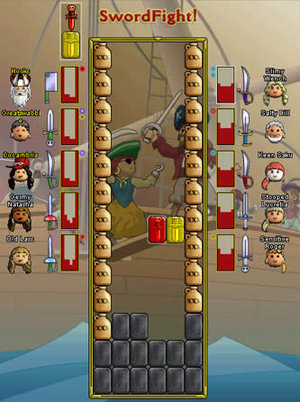 Rum sickness in a swordfight

When a ship at sea runs out of rum, the crew aboard becomes rum sick. When pirates are rum sick, their efficiency in duty puzzles drops, and swordfight and rumble brawls become more difficult. When puzzling at a duty station of one of the affected duty puzzles (bilging, carpentry, duty navigation, patching, rigging, or sailing), the performance indicator and the duty report scores will function the same as without rum sickness, but a given puzzle score will contribute less to the welfare of the ship than before.

During a swordfighting brawl, indestructible rum jugs will line both of the outermost columns of the players' puzzles, shrinking their playing field. During a rumbling brawl, the rumble balls will automatically launch more often than normal (if the player does not fire them), and the pirates' fists will shake, causing balls to sometimes travel in a slightly different direction than they were aimed.

The following messages are sent shipwide to all pirates aboard.

When the ship first runs out of rum:

At regular intervals while rum sick:

At the beginning of a brawl:

When the vessel re-aquires rum:

When the pirates have completely recovered: