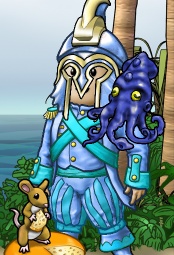 Darros began playing Puzzle Pirates in February 2012. He started on the Cerulean Ocean but has also sailed upon the Emerald Ocean and Meridian Ocean (mostly on Emerald). Later he made an account in Obsidian Ocean on September 25, 2017.

His first day as a greeter was May 24, 2015. Darros's native language is Norwegian (Bokmål).

His home island is Aimuari Island (Hunter side - Orion Archipelago).

Darros's Ironworking Stall on Aimuari Island (closed down and moved)

Norwegian Iron on Aimuari Island (iron monger) - previously called Mount And Blade (renamed May 9, 2020 and was destroyed between May 9 and August 14, 2020 probably due to lack of funds?)

Darros met Dannyb at Aimuari dock and he asked Darros to join the crew The Tiger Sharks.

One day Darros met Jinxiee from Fistful of Silence (at that time, the crew name was Cit Cats) and she recruited Darros by offering him a higher rank than the last crew he was in.

Darros left the crew Fistful of Silence due to Stipee ranked him from officer to cabin person due to meeting with the Black ship in a pillage he was running near Aimuari. He also left 10,000 PoE to the jobbers after being defeated because he wanted them at least to earn something for their job before he got ranked to cabin person.

When he joined the crew Dreams Warriors, Laopo bought him some clothes.

On January 27, 2015, the crew started to do foraging as a fundraiser for the crew. Bigeyes wanted Darros to use one of his alts to take over the foraging when he had time because he was one of the most active pirates in the crew. Darros bought a grand frigate (and surprisingly enough the only GF in the crew) a few days later because a merchant galleon got filled too fast and he couldn't run the fruit himself because he hadn't memmed the route yet.

On September 29, Darros bought an IM named Mount and Blade (upgraded) on Aimuari island from Neology.

The game changed the server on April 6, 2016 and it ended bad for Darros because he normally log on via facebook and due to the server change, Puzzle Pirates login via https://apps.facebook.com/puzzlepirates and http://www.puzzlepirates.com/getdown.xhtml wont work, the only opinion was to download the game to the desktop or login via steam.

He petitioned the OM a few times about the issue by using his alt and the OM transferred Darros's facebook account data to a new account Darros created on April 13, 2016 (7 days after the server change).

The next day Darros tried to log on his new account, all of his data has been moved to the new one, but unfortunately Darros started again with green name because the account has been online for less than 15 game hours. The OM made Darros able to /duty again after another petition and after that, he was joking in the crew chat that he is the ONLY greeter with pink/green name.

During 2016, Darros decided to close down Brassyphoebe's Ironworking stall on Bowditch Island due to he did not had the time to take care of the stalls and because Brassyphoebe has not been online since February 14, 2015. He later stopped being active for 2 years (but once in a while did log on to check up with his other stalls)

On July 27, 2019 he won a krakling in Totalism's KH run after 5 entries. Darros also heartied Totalism after his earlier KH run that day after being asked to join that KH run from his hearty Dreamynose.

On May 9, 2020 he renamed Mount and Blade (iron monger) to Norwegian Iron.

On August 14, 2020 he noticed that he lost the iron monger on Aimuari during inactivity

His home island is Lima Island (Viridian side - Jade Archipelago).

His first crew was Blood and Brimstone and his first flag was Plunder Her Riches.

Darros's current crew is The Pirate Throne and his current flag is The War Throne.

Darros started sailing on Meridian a long time ago, then was inactive for a long time.

He joined Ncredible's (Hinesight on Emerald) crew Blood and Brimstone of the flag Plunder Her Riches, but got kicked out by Medusaman after a short time due to inactivity on that ocean.

After that Darros was looking for a new crew at Lima Island's inn and joined the crew Trouble of the flag Tsunami in March 2015, but when he was inactive again, he was demoted from officer to pirate. He left the crew in May 2015 because he couldn't run pillages with that rank.

When he was searching for a new crew for the 3rd time, Dizzybones invited Darros to the crew one second before he was starting to post looking for crew offer at the inn and joined the crew the wonders of the flag We Be Pirates on May 15 as an officer.

On June 17 he went back to Meridian and found out that the crew he was on had been merged and now he's on the crew Boldly Going Nowhere of the flag Radioactive.

On Monday 13, July 2015 Darros left his crew/flag and joined the crew The Pirate Throne of the flag The War Throne a few days after he noticed that Dizzybones had left Boldly Going Nowhere.

This was his starter ocean when he was playing Puzzle Pirates for the first time.

His home is Eta Island (Midnight side - Ruby Archipelago)

Darros cannot remember his first crew and flag. At the moment he has no crew or flag.

He started to play on that ocean until his brother told him that he should go for the doubloon oceans.

His home island is Night Harbour in Darkling Seas Archipelago

His first crew is Suspicious Activity under the flag Nothing to Sea Here which is his current crew and flag.

Darros created an account for Obsidian Ocean on September 25, 2017. The next day, he joined the crew Suspicious Activity because he wanted to be in the same crew as Bigeyes.

Bought his first ship, a sloop named Sluggish Sailfish from a pirate named Cptngmp for 59999 PoE on February 25, 2018.