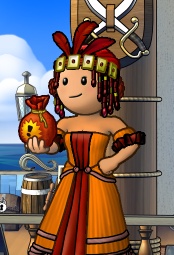 Cxieyei is currently the captain of the crew Slaughter of Elysium, and queen of the flag Posthumous Reign. She sails proudly on the Hunter Ocean.

The life of a Pirate

Cxieyei washed up onto the Chachapoya shoreline, having no memory of what had happened to her only moments before. She made herself at home in an Adobe Abode shack with her pet rat Dormouse, and began her new career as a jobber.

At the notice board a crew name caught her eye and she sent the carrier pigeon off with her application. Cxieyei was accepted on the ship with the Kings Of Chaos. They voyaged and traveled a good distance, stopping at islands and making decent booty along the way. Their last stop was at Sho-ke Island, were they all gathered near the stones and pond for a photo opportunity. Cxieyei felt very safe and comforted by the crew, and knew she had finally found her home.

Chaos in the Ranks

Cxieyei worked hard in Kings Of Chaos, and was soon promoted to officer. She began leading pillages almost daily, and became very active in the crew. Cxieyei met Eldharin, another officer and created an instant friendship.

Slaughter of Elysium and Majestic

When Slaughter of Elysium became established and rumoured, Cxieyei decided to join a flag where she felt most at home. That flag was Majestic. Slaughter of Elysium were with Majestic for a while and although they at first had no plans on leaving, they eventually did so.

After a lot of issues, fights, misunderstandings and mess during the last days of Majestic, Cxieyei gathered the opinions of almost all the officers in the flag, and supported by the other crew in flag, she decided to start one called Posthumous Reign. The new flag has less royals but more understanding and since then, she proved she is a wise queen supported by her princess gang.

Many days went by, and numerous adventures laid in wait for her to discover. Along with those adventures so did small clues revealing her long lost past.

Cxieyei recently found out she was the daughter of an established gunner. She has since taken a big step to filling her father's shoes. Cxieyei became paragon at Gunnery on 23/02/07 and was awarded her Golden Cannon trophy on 25/02/07. She is very proud of her accomplishments in the Gunnery puzzle. Cxieyei guns for Slaughter of Elysium and also with Coldarrow and The Hollow Ones quite frequently, as she truly enjoys the company of her fellow flag members.

Cxieyei can usually be found near the cannons, greeting at the docks, or in her newly purchased manor on Aimuari Island.

She tends to avoid Quetzal Island. Cxieyei believes the dislike may stem from her lost past, or perhaps the fact that she arrived on Chachapoya instead. She puts this down to hometown rivalries.