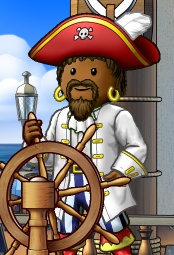 Chancy former monarch of the flag Otherworld and poet of the crew Loose Cannons.

His Brinyness King Chancy believes in being helpful to all who sail with any of the crews under his command and who are new to ship duties. All are welcome to job with any of his crews. Ye won't find a friendlier or more helpful mate anywhere...just don't be sending him tells while he's bnavin. ;-)

He holds to a higher standard of training than most for new Officers in the crews under his flag, and even higher for his Captains and their Senior officers and who he relies on like his sword arm.

Pillagin is Chancy's main focus and does so at any opportunity, whilst balancing his diplomatic duties of office for the furtherance of flag Otherworld. He is the proud owner of the Wrights of Spring where he spends his time (and his POE) when he is not out pillaging with his crew.

Good King Chancy is a second pirate account. He has a secret past that is not well known beyond those who were there during first blockade of Spring.

On March 6th 2010 Chancy resigned as monarch of the flag and bestowed the scepter of office the coveted "Golden Plank" upon his loyal Firstmate and Diplomat Lothias, who became the 4th reining monarch of flag Otherworld.