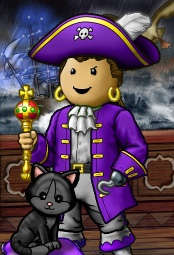 Lothias is a senior officer of the Bloody Scoundrels crew, under the captaincy of Redruth.

The current focus of the Bloody Scoundrels is in the building and training of their crew. Assigning the senior staff (senior officers) to train members of the crew to become officers and fleet officers and find a greater satisfaction through expertise in puzzling in the gaming atmosphere while still keeping the experience enjoyable.

As SO of the Bloody Scoundrels, Lothias's duties are to actively seek out new mates to join the crew, help the new officer candidates gain proficiency in commanding ship and crew, and or make recommendations upon possible areas for improvement.

One other facet of the gaming experience through Lothias is that of the "Pirate Linga", he is a much noted authority on the subject and understanding Lothias is almost as much of a challenge as the game puzzles themselves. Another odd note to the legacy of Lothias is that he exists on every ocean in the game.

On March 6th 2010, Lothias was crowned monarch of flag Otherworld when Chancy abdicated due to pressures in RL, Lothias is the 4th reining monarch of the flag and hopes to bring the flag to new heights of glory in the days to come.

On February 10th 2011, Lothias tendered his resignation as the monarch of flag Otherworld, whilst also leaving the crew of the Loose Cannons and the flag entirely. As predicted by Marmy, captain of the Loose Cannons...not more than a few scant hours went by before Lothias was hired on by a new crew...the Bloody Scoundrels.

Yoho Puzzle Pirates and keeping the gaming experience fun for his crew and flag. Or as Lothias puts it: "Pirate'n, Pillage'n n PoE matey...YARRR!!"