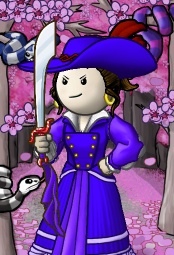 Casyopeiya is a citizen of Aimuari Island in the Orion Archipelago and also an owner of five houses:

Casyopeiya is now a fleet officer of Frisky Business of the flag Illuminatti.

Casyopeiya had her style changing with the time, first her dressing was orange/turquoise, then she decided to wear all red. With time her clothing changed to full green set. Casyopeiya currently wears purple clothing.

Casyopeiya is known for her outstanding Rumble skill and her finest Rigging skill. She likes to play poker and go on voyages from island to island. Casyopeiya is not just a woman pirate, but a strong minded one, whenever she is in hard times at a voyage, she knows exactly what to do.

Casyopeiya's time with Avius Anima was long, but since the crew was inavctive for a long time, she left it even thou she go along well with her crewmembers especially Xerozia, Snakeace, and Robinhoodx. The day she left Avius Anima was the day she joined Swords and Bludgeons. She befriended WillowPillow, Supersam and the captain Cjmjr. After some time, the crew became inactive, so she left.

On a random day, Casyopeiya was playing poker at he Rest inn peace inn, there was a pirate named Klerko who was recruiting members to the Deja Voodoo crew. She applied and with her skills she became a fleet officer immediately. Casyopeiya's friend Taranz was a senior officer in that crew, and he welcomed her. They became closer friends, and with the time Casyopeiya befriended the rest of the senior officers in the crew, including the captain, Nadiaa.

Casyopeiya is a fleet officer of Frisky Business, a new crew that includes veteran former members of Deja Voodoo of the Emerald Ocean. She got the title of counselor once again Since her activiry in Deja Voodoo as the counselor was remarkable.