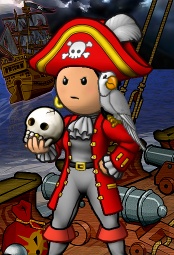 Carrol is a senior officer, former flag liason officer, and card sharp in The Lost Lot.

Carrol started playing on the Sage Ocean in September of 2005. Shortly after starting, she joined the crew Snark Attack, a member of The Light Brigade. Shortly after earning the rank of pirate, the captain of Snark Attack moved the crew to a subscription ocean, and Carrol was offered a position in The Lost Lot. She moved up to officer rank fairly quickly, however it took her well over a year to meet The Lost Lot's requirements to advance to fleet officer, at which point she was soon advanced to senior officer, which is the position she now holds.

She began participating in forum contests with the Spooky Pirate Vignettes contest, a writing contest for holloween 2005. Her story, titled The Myth o' Davy Jones' Locker, won her a sloop named the Spooky Bonefish. Since this successful first attempt, she has entered several other forum contests with varrying degrees of success.

Carrol has a hobby of collecting renamed ships. Her favorites to date include the sloop Spooky Bonefish (won from the Spooky Pirate Vignettes contest, custom Spooky name), the sloop Patient Sailfish (won in the first TLL Sailing Bake-Off, standard rename), the cutter Royal Oak (custom rename), and the dhow Eastern Stargazer (won in the BK Fruit Frenzy Races, and standard rename free as a prize from the Ice Ocean Raffle).