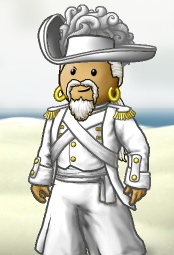 Captmaxrazor is a senior officer and the ambassador in the crew Sky Raiders under the flag Skyhigh on the Hunter Ocean. He is also fleet officer of the crew Dark Impulse under the flag Temptation on the Sage Ocean. His favorite duty puzzle is Rigging, and likes talking to people and making friends.

Captmaxrazor is a fun-loving, talkative, and honest pirate. He likes to please and is kind to new-comers. He is a faithful pirate, always comes online every day seeing how he may help his crewmates and others.

Captmaxrazors past is a mysterious one. He was a well-known and active member on Hunter Ocean in the year 2005, and he was characterized by his snowy white hair, beard and clothes. One day he disappeared and no one knew what happened to him. Inquiries were made as to his whereabouts and rumors said that he had gone to a distant island in the north of the ocean, trying to fend off mystical warriors invading from the north. He was never seen again until one day, October 11th, 2010, when all of a sudden, a tattered pirate with a white beard and hair washed up on the coast of Chachapoya. Since his arrival he has slowly gotten used to the pirate life that he had lived previously, and he never spoke of what happened during those 5 years of mystery.

He also a member of Sage ocean as his home as well, going there when he needs peace and relaxation with his crew mates on there. He is also seen infrequently on Midnight, and Viridian

Captmaxrazor has many things that he is working toward on hunter ocean. Some of his goals are as follows:

This list will grow as he find pirates whom he trusts and that make Puzzle Pirates fun:

Captmaxrazor is the owner of the sloop Stubborn Catfish which is painted all white.